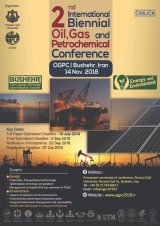 This Paper COI Code is OGPC02_079. Also You can use the following address to link to this article. This link is permanent and is used as an article registration confirmation in the Civilica reference:

If you want to refer to this Paper in your research work, you can simply use the following phrase in the resources section:
Joharifard, Mohammad and Soleymanzadeh, Aboozar and Helalizadeh, Abbas,1397,Experimental Study on the Rate of Asphaltene Aggregation at the Oil-Brine Interface Utilizing Refractive Index Technique,2nd Biennial Oil, Gas and Petrochemical Conference (OGPC 2018),Bushehr,https://civilica.com/doc/1041194

The specifications of the publisher center of this Paper are as follows:
Ranking of Petroleum University of Technology
Type of center: دانشگاه دولتی
Paper count: 2,105
In the scientometrics section of CIVILICA, you can see the scientific ranking of the Iranian academic and research centers based on the statistics of indexed articles.