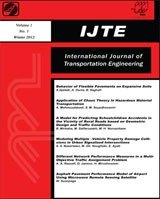 International studies on bicycle demand have shown that females and males can have different transportation behavior due to their innate differences, as in social responsibility and access to facilities. Considering the almost equal and significant share of females in urban trips, and also the cultural aspects, this issue is of even more importance in Tehran, which lacks detailed focused research studies. This paper aims to model bicycle demand for Tehran stressing on gender difference impacts. Regarding the scope of the research, a questionnaire field survey was designed to gather the required data for modeling purposes. Using a random sample of Tehran citizens stratified by employment status, the field survey was conducted, in March 2013. Data collected include demographic, economic, environmental, and travel information. The survey included the question, “How much do you use bicycle for urban trips?” as the dependent variable. Choice answers include four alternatives: never, rarely, sometimes, and often. Based on the collected data, ordered logit models are calibrated separately for males and females to analyse gender impacts on bicycle demand. Results indicate that age, number of cars, number of bikes and access to public transportation have different impacts on the demand of females and males for bicycle trips. Also, some variables such as education level and access to bike houses are found to be significantly related to males cycling but not females. It was also concluded that better and more in-depth information about gender differences in using bicycle is gained by estimating separate models for females and males.

This Paper COI Code is JR_IJTE-8-3_001. Also You can use the following address to link to this article. This link is permanent and is used as an article registration confirmation in the Civilica reference:

If you want to refer to this Paper in your research work, you can simply use the following phrase in the resources section:
Mamdoohi, Amir Reza and Amini, Vajihe,1400,Bicycle Demand: A Gender Analysis for Tehran, Iran,https://civilica.com/doc/1184629

The specifications of the publisher center of this Paper are as follows:
Ranking of Tarbiat Modares University
Type of center: دانشگاه دولتی
Paper count: 34,218
In the scientometrics section of CIVILICA, you can see the scientific ranking of the Iranian academic and research centers based on the statistics of indexed articles.