Comparison of Factors Associated with the Neonatal Mortality Rate in Fars Province before and after Implementing the Health Section Evolution: A Retrospective Cross-Sectional Study 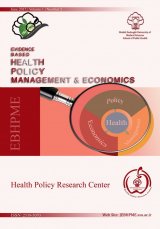 Background: The neonatal period or the first ۲۸ days after birth is a critical and vulnerable time for a child period, and the mortality rate is high due to the severe problems which might happen during this period. The goal of this study was to compare the risk factors associated with the neonatal mortality rate (NMR) before and after the implementation of the health sector evolution plan (HSEP) in Fars Province, Iran. Methods: This study was a retrospective cross-sectional study. This research was conducted using the census method, and ۲۷۵۹۵۱ newborns’ files were studied. Variables are expressed as percentage and frequency. The chi-square test and Fisher tests was used to measure the significance level of variables. A multivariate logistic regression model was also used to estimate the odds ratio of neonatal mortality and risk factors associated with neonatal mortality. All statistical tests were performed bilaterally with P-value < ۰.۰۵ considered as significant. All tests were conducted using the software SPSS۱۹. Results: After HSEP, risk factors of pregnancy and delivery complications were significantly reduced, and abnormalities were significantly increased (P-value < ۰.۰۰۱). Using multivariate logistic regression analysis, the risk of death is nine times more in gestational age below ۳۷ weeks compared to gestational age over ۳۷ weeks. The chances of neonatal mortality among neonates weighing less than ۱۰۰۰ grams are much more, and it is about ۱۴۰ times more than normal weight (over ۲۵۰۰ grams). There was not a significant relationship between the chance of neonatal mortality and the implementation of HSEP (P-value > ۰.۰۵). Conclusion: Neonates with abnormal weight and premature neonates had the highest chance of death. Therefore, the prevention of preterm labor and low-birth-weight infants are essential factors in reducing neonatal mortality. This study suggests that improved health service quality is determinative to decrease neonatal mortality rate.

This Paper COI Code is JR_EBHPME-5-1_006. Also You can use the following address to link to this article. This link is permanent and is used as an article registration confirmation in the Civilica reference:

If you want to refer to this Paper in your research work, you can simply use the following phrase in the resources section:
Alimohammadzadeh, Khalil and Falahati, Farshad and Karami, Hassan and Parsa, Hamidreza and Shirvani Shiri, Maryam and Erami, Atila and Eskandari Kootahi, Zahra and Erfani, Maliheh,1399,Comparison of Factors Associated with the Neonatal Mortality Rate in Fars Province before and after Implementing the Health Section Evolution: A Retrospective Cross-Sectional Study,https://civilica.com/doc/1217968

The specifications of the publisher center of this Paper are as follows:
Ranking of Islamic Azad University of North Tehran
Type of center: Azad University
Paper count: 8,273
In the scientometrics section of CIVILICA, you can see the scientific ranking of the Iranian academic and research centers based on the statistics of indexed articles.