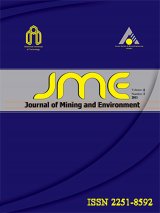 In this research work, the bio-leaching of Co and Ni from an iron-rich laterite ore is assessed using the acidophilic heterotrophic (Delftia acidovorans)and autotrophic (Acidithiobacillus ferrooxidans) bacteria. The metabolic products of the acidophilic bacteria play an important role in bio-leaching. The results obtained from the indirect bio-leaching indicate the highest nickel recoveries of up to ۸۳.۶۵% and ۸۰.۱۸%, respectively, by the supernatants of Acidithiobacillus ferrooxidans and Delftia acidovorans, both measured at ۹۰ °C for ۳ h with a stirring speed of ۳۷۰ rpm and S/L of ۰.۱, while the corresponding cobalt recovery rates have reached ۸۶.۹۳% and ۸۳.۹۴%, respectively. The iron dissolution rates in these conditions for the two studied bacteria are ۶۴.۳۴% and ۵۴.۴۱%, respectively. The nickel and cobalt extractions by the indirect bio-leaching of Delftia acidovorans are, respectively, ۲۹.۸۴% and ۲۳.۷۵% higher than those for the direct bio-leaching, performed at ۳۰ °C and ۱۵۰ rpm of an incubator shaker for ۳۰ days. For the indirect bio-leaching, the chemical control has a larger influence on the dissolution rate of the iron-rich laterite compared to the diffusion control. The activation energies of nickel and cobalt in the chemical control model are ۴۰.۰۷ and ۳۹.۰۸ kJ/mol, respectively.

This Paper COI Code is JR_JMAE-12-2_013. Also You can use the following address to link to this article. This link is permanent and is used as an article registration confirmation in the Civilica reference:

If you want to refer to this Paper in your research work, you can simply use the following phrase in the resources section:
Hosseini Nasab, M. and Noaparast, M. and Abdollahi, H.,1400,Direct and Indirect Bio-Leaching of Co and Ni from an Iron-Rich Laterite Ore using Delftia Acidovorans and Acidithiobacillus Ferrooxidans,https://civilica.com/doc/1241085

The specifications of the publisher center of this Paper are as follows:
Ranking of University of Sistan and Baluchestan
Type of center: دانشگاه دولتی
Paper count: 11,374
In the scientometrics section of CIVILICA, you can see the scientific ranking of the Iranian academic and research centers based on the statistics of indexed articles.