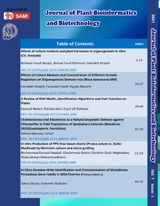 In vitro cultivation method is a proper way to fast propagation of commercial rose cultivars with high uniformity, and even today, it is regarded as a desirable solution for correction through genetic manipulation. In order to study the effect of hormone and culture medium on the micropropagation potential of GolD damask rose, an experiment was conducted as a completlely randomized design with three replications. In this study, Lateral bud explants, ۵ culture media including MS, ۱.۲ MS, VS, ۱.۲ VS, and WPM with four plant growth regulators including benzylaminopurine (BAP), ۲-isopentenyl adenine (۲iP), naphthalene acetic acid (NAA), and indole butyric acid (IBA) were evaluated at concentrations of ۰, ۰.۵, ۱, and ۱.۵ mgL-۱. The results of analysis of variance showed a significant difference between culture media, type and causality of hormones, and their interaction for the studied traits. The best response for these traits was obtained from VS medium, and the weakest response was taken from WPM medium. The results of interaction effect showed that the highest values ​​for shoot length, greenness, percentage of yellow leaves, fresh and dry weight of shoots in VS medium were obtained using BAP hormone at a concentration of ۱.۵ mgL-۱. The highest mean of rooting percentage, fresh and dry weight of roots was obtained in VS medium using ۱.۵ mgL-۱ IBA.

This Paper COI Code is JR_JPBB-1-1_002. Also You can use the following address to link to this article. This link is permanent and is used as an article registration confirmation in the Civilica reference:

If you want to refer to this Paper in your research work, you can simply use the following phrase in the resources section:
Khajeh, Hamideh and Fazeli, Farzaneh and Mazarie, Ayoub,1400,Effects of Culture Medium and Concentration of Different Growth Regulators on Organogenesis Damask rose (Rosa damascena Mill),https://civilica.com/doc/1246609

The specifications of the publisher center of this Paper are as follows:
Ranking of Zabol University
Type of center: دانشگاه دولتی
Paper count: 7,167
In the scientometrics section of CIVILICA, you can see the scientific ranking of the Iranian academic and research centers based on the statistics of indexed articles.