RUNNING THROUGH THE GREAT UNKNOWN: COMING OF THE AGE IN JOHN GREEN’S PAPER TOWNS 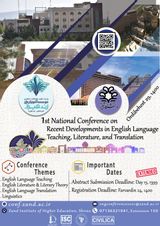 Coming of age has been explicated as limitation of synthesized imaginations and reality of an adolescent including overcoming the urge of expecting individuals to seek greatness in certain ways. From this prospect, John Green, an influential bildungsroman writer and the Edgar award-winning author, offers such implications in his notable work, Paper Towns. In the book, Green denotes the emotions of the protagonist adolescent, Quentin Jacobsen, who feels like an outcast wherever he goes. The author also targets various human emotions such as nostalgia, awkwardness, love, anxiety and confusion through metaphorical and lyrical statements. As a matter of fact, Paper Towns targets adolescents’ conflicts of determining the borders between reality and expectations. Therefore, the researcher in this study examines the mental conflicts of adolescence through problematizing the concept of coming of age.

This Paper COI Code is RDELTLT01_016. Also You can use the following address to link to this article. This link is permanent and is used as an article registration confirmation in the Civilica reference:

If you want to refer to this Paper in your research work, you can simply use the following phrase in the resources section:
Dorostkar, Maryam,1400,RUNNING THROUGH THE GREAT UNKNOWN: COMING OF THE AGE IN JOHN GREEN’S PAPER TOWNS,First National Conference on Recent Developments in English Language Teaching, Literature and Translation,Shiraz,https://civilica.com/doc/1270112

The specifications of the publisher center of this Paper are as follows:
Ranking of Zand Institute of Higher Education
Type of center: موسسه غیرانتفاعی
Paper count: 434
In the scientometrics section of CIVILICA, you can see the scientific ranking of the Iranian academic and research centers based on the statistics of indexed articles.