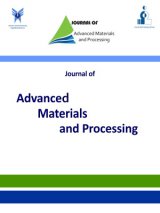 In this study, Ti, Al and N doped DLC – referred to here after as “(Ti,Al)CN/DLC composite”- coating and pure diamond-like coating (DLC) were produced by cathodic arc deposition technique and the effects of the coating thickness on their tribological properties were evaluated. The coatings were characterized, using scanning electron microscopy (SEM), atomic force microscopy (AFM), X-ray diffraction (XRD) and Raman spectroscopy methods. The Raman and XRD patterns indicated that cathodic arc deposition method can potentially generate a composite coating consisting of TiC, Ti۳AlN, Ti۲N and Al۲Ti crystalline phases dispersed in the amorphous carbon matrix. Moreover, friction and wear of the coatings were investigated, using pin-on-disc wear test method in ambient air. The results of wear test showed a desired tribological behavior of the (Ti,Al)CN/DLC composite coatings with low amounts of the mean coefficients of friction (۰.۲) and wear rate (۹×۱۰-۸ mm۳/N.m). In contrast with DLC coatings, it was also found that friction coefficient of the composite coated samples did not change significantly, when the thickness of the coating was increased from ۱.۵ to ۳ μm.

This Paper COI Code is JR_JMATPR-4-2_003. Also You can use the following address to link to this article. This link is permanent and is used as an article registration confirmation in the Civilica reference:

If you want to refer to this Paper in your research work, you can simply use the following phrase in the resources section:
Zahiri, Laleh and saeri, Moahammad and Alirezaee, Shahram and Afkhami, Alireza,1395,Evaluation of tribological properties of (Ti,Al)CN/DLC composite coatings deposited by cathodic arc method.,https://civilica.com/doc/1282735