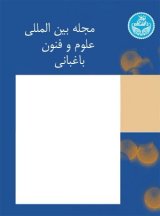 Understanding genetic diversity and germplasm classification are the keys for selection of right parents for breeding purposes. In the present study, the genetic diversity and classification of ۴۵ Iranian and ۱۵ foreign melons were evaluated. A greenhouse experiment was laid out as a randomized completely block design with three replications and five plants in each replicates. Fruit number had a positive correlation with female flower numbers, fruit number, and fruit yield. The fruit number, however, correlated negatively with the leaf area. Genotypes with monoicous flowering habit produced female flowers in lower nodes and formed longer fruit. The number of the female flower, fruit number, yield, high total soluble solids (TSS), leaf area, the first node of female appearance, and flesh firmness were amongst the high weighted and more coefficient in the component analysis. For the breeding purpose, all accessions of cluster ۴ were andromonoecious and obtained high TSS, leaf area, and flesh firmness. From the first three clusters, ۱۱ accessions were monoecious, which belonged to TN-۹۳-۵, TN ۹۲۱۰۰, TN ۹۲۱۰۷۱, TN ۹۲۲۰۲۵ (Cluster۱), FLTM ۲۷, and FLTM۳۵ (Cluster۲), TN۹۲۱۰۲۶, TN-۹۴-۲۱, TN- ۹۴-۴۴, TN-۹۴-۲۸, and TN-۹۴-۳ (Cluster۳). The characteristic of cluster ۳ included melons with high female flower and fruit number and fewer number of the first node of female flower. In conclusion, good genetic resources and foreign types for selection are available for improving the breeding of melons based on the evaluated traits.

This Paper COI Code is JR_IJHST-9-1_008. Also You can use the following address to link to this article. This link is permanent and is used as an article registration confirmation in the Civilica reference:

If you want to refer to this Paper in your research work, you can simply use the following phrase in the resources section:
Soltani, Forouzandeh and Shajari, Moien and Mirbehbahani, Giti Sadat and Bihamta, Mohammad Reza,1401,Assessment of Melon Genetic Diversity Based on Fruit Phenotypic Traits and Flowering Habits,https://civilica.com/doc/1291720

The specifications of the publisher center of this Paper are as follows:
Ranking of University of Tehran
Type of center: دانشگاه دولتی
Paper count: 76,486
In the scientometrics section of CIVILICA, you can see the scientific ranking of the Iranian academic and research centers based on the statistics of indexed articles.