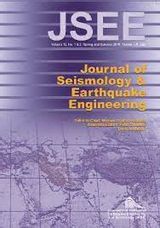 Due to the spatial variations of the strong ground motions and Near-Field (N-F) effects, significant and unexpected damages have been observed in long-span bridges during past earthquakes. One of the outstanding characteristics of N-F motions is the forward directivity effect seen as a single, intense, long period pulse at the beginning of velocity records in the fault-normal direction. To better understand the effect of this pulse and the wave passage effect of spatially correlated motions on the seismic response of long-span bridges in comparison with these bridges' response to the far-field earthquakes, a comprehensive case study has been done in three parts on the finite element model of a long-span bridge: ۱) Uniform excitations of the model bridge with forward directivity pulses and the original records; ۲) Asynchronous excitations with different shear wave velocities for impulsive part of the inputs; and ۳) Comparison of the wave passage effect of two sets of near-field and far-field strong ground motions (SGMs) on the seismic response of the model bridge. The results showthat the wave passage effect of forward directivityN-F pulses can have significant influence on the bridge nonlinear response, and it becomes more evident in the soft soils causing severe seismic demands. Even in the case of rock sites, ignoring this effect can result in under-designed piers. Besides, comparison of the near-field and far-field SGMexcitations effect on the bridge response indicates that although in uniform excitations both sets cause approximately the same displacement response values, in the case of asynchronous inputs, the N-F records can produce larger ductility demands.

This Paper COI Code is JR_JSEE-16-2_003. Also You can use the following address to link to this article. This link is permanent and is used as an article registration confirmation in the Civilica reference:

If you want to refer to this Paper in your research work, you can simply use the following phrase in the resources section:
Yasrebi, Laleh and Ghafory-Ashtiany, Mohsen,1393,Inelastic Response of a Long Span Bridge under Asynchronous Near-Field Pulse-Like and Far-Field Excitations,https://civilica.com/doc/1299576

The specifications of the publisher center of this Paper are as follows:
Ranking of international institute of Earthquake engineering and seismology
Type of center: پژوهشگاه دولتی
Paper count: 2,296
In the scientometrics section of CIVILICA, you can see the scientific ranking of the Iranian academic and research centers based on the statistics of indexed articles.