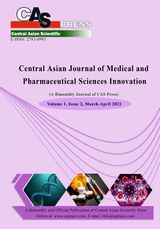 The proper functioning of ion channels is essential for cell survival. One of the important ion channels is potassium voltage-gated channel subfamily Q member ۱ (KCNQ), which consists of five genes whose main gene is KCNQ۱ and encodes the voltage-gated potassium channel required for the phase of repolarization. KCNQ۱ is mainly expressed in the heart muscle, inner ear, stomach, lungs, kidneys, intestines, and pancreas. This channel is essential for the proper functioning of cells in some organs of the body, including the heart and stomach. Thus, mutations and polymorphisms in this gene can alter the risk of some diseases, such as long QT syndrome and gastric cancer. The aim of this study was to investigate the effect of rs۱۸۰۰۱۷۲ exon polymorphism on the function of the KCNQ۱ gene using a bioinformatics approach. The ProtParam server was used to evaluate the primary structure of the protein. The PredictProtein server was used to investigate the effect of mutations on the secondary structure of the protein. Polyphen۲ and SNAP۲ servers were used to evaluate the effect of rs۱۸۰۰۱۷۲ variety on overall protein structure and function. RNAsnp online software was used to investigate the effect of mutation on mRNA structure. Our study showed that rs۱۸۰۰۱۷۲ polymorphism affects the primary and secondary structure of proteins. But this genetic variety did not affect mRNA structure. Investigation of the effect of KCNQ۱ gene mutations including rs۱۸۰۰۱۷۲ can be effective in identifying the pathological mechanisms of KCNQ۱.

This Paper COI Code is JR_CAJMPSI-2-2_003. Also You can use the following address to link to this article. This link is permanent and is used as an article registration confirmation in the Civilica reference:

If you want to refer to this Paper in your research work, you can simply use the following phrase in the resources section:
Al-Râwanduzi, Ahmed Diyar and Ahmed, Salar,1401,Influence of rs۱۸۰۰۱۷۲ common gene variation on the structure and function of potassium voltage-gated channel subfamily Q member ۱,https://civilica.com/doc/1422278