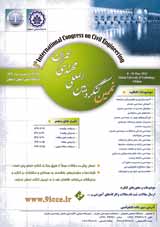 The recent researches have demonstrated that thin steel plates have good performance under shear loadings, and upon that property, they have been used in some of the lateral resistant systems such as steel plate shear walls. In the present study, it is intended to employ the shear panels for seismic performance improvement of concentrically braced frames. Hence, a combined system is developed and its non-linear behavior has been numerically and experimentally investigated. For experimental study, a scaled one-story shear panel model, with hinge type connections of boundary elements at four corners, is selected. Bolts are used for connections of infill steel plate to surrounding frame. The specimen is subjected to quasi-static cyclic loading along the diagonal axes. It is found that the system have had good seismic performance, proper energy absorption, and stable behavior in nonlinear range. Finite element analysis of the laboratory specimen has been carried out and results are obtained and presented. Good agreement between the numerical and the experimental outcomes is observed

This Paper COI Code is ICCE09_341. Also You can use the following address to link to this article. This link is permanent and is used as an article registration confirmation in the Civilica reference:

If you want to refer to this Paper in your research work, you can simply use the following phrase in the resources section:
Khazaei-Poul, Masoud and Nateghi-Alahi, Fariborz and Alavi, Erfan,1391,Seismic Behaviour of Concentrically Braced Frame System Combined with Steel Shear Panel,9th International Congress on Civil Engineering,Isfahan,https://civilica.com/doc/165409

The specifications of the publisher center of this Paper are as follows:
Ranking of international institute of Earthquake engineering and seismology
Type of center: پژوهشگاه دولتی
Paper count: 2,296
In the scientometrics section of CIVILICA, you can see the scientific ranking of the Iranian academic and research centers based on the statistics of indexed articles.