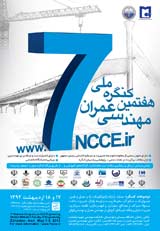 The present study was conducted to determine peak ground acceleration (PGA) over bedrock in probabilistic analysis methods for the seismic hazard and uniform hazard spectra at different hazard levels for Esfahan city. A series of statistics containing historical and instrumental seismic data covering from the 8th century A.D. to the now up to a radius of 200 km was employed and seismic sources were modeled up to a radius of 200 km from Esfahan city. For this purpose the method proposed by Kijko (2000) was employed considering uncertainty in magnitude and incomplete earthquake catalogue. Seismic hazard analysis is then carried out for Esfahan city by using SEISRlSK III (Bender and Perkins, 1987) program for 11×13 grid points. Four different attenuation relationships of Ghodrati et al (2007), Campbell (1997), Ambrasyse et al. (1996) and Zare et al (1999) were used to determine the PGA on bedrock. Using the Logic Tree Method, these four relationships have been respectively combined with the weight of 0.4, 0.1, 0.2 and 0.3. The PGA can be determined for 143 points and the hazard spectra can be specified for 20 points of the city. Attenuation relationships of Ghasemi et al (2008), Thierry and Berge et al. (2003), Ghodrati et al (2010) and Ambrasyse et al. (1996) were also respectively combined with the weight of 0.3, 0.1, 0.4 and 0.2 in the Logic Tree Method for determined hazard spectra. Covering %2 and %10 probability of exceedance in one life cycle of 50 years are presented. Finally, the uniform hazard spectra was also presented with %10 and %2 of probability of exceedance in one life cycles of 50 years are presented along with New Mark and Hall Spectra

This Paper COI Code is NCCE07_1183. Also You can use the following address to link to this article. This link is permanent and is used as an article registration confirmation in the Civilica reference:

If you want to refer to this Paper in your research work, you can simply use the following phrase in the resources section:
Khodadadi, E and Ghodrati Amiri, GH.R. and Razavian Amrei, S.A and Izadi, GH.R,1392,SEISMIC HAZARD ANALYSIS AND OBTAINING UNIFORM HAZARD SPECTRA FOR ESFAHAN REGION, IRAN,7th National Congress on Civil Engineering,Zahedan,https://civilica.com/doc/217175