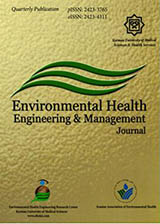 Background: Mature landfill leachate is a complicated mixture which is resistant to biological treatment processes. The treatment of mature landfill leachate by struvite precipitation and Fenton oxidation was the main objective of the current research.Methods: Struvite with the phosphate/ammonia/magnesium molar ratio of 1/1/1.05 was considered during all experiments. Five initial pHs of 3, 4, 5, 6, and 7, four different H2O2/Fe mass ratios of 50, 100, 200, and 400, and reaction times of 20, 40, 80, 120, and 160 minutes were examined for the Fenton oxidation process.Results: A leachate sample with average chemical oxygen demand (COD), BOD5, and NH4 concentrations of 7350, 2220, and 2280 mg L-1, respectively, and a BOD5/COD ratio of 0.3 was introduced to the chemical precipitation unit. An NH4 removal efficiency of 87% was obtained at pH 8.5 for struvite precipitation. Under optimum conditions of Fenton oxidation, including pH 3, an H2O2/Fe2+ mass ratio of 200, and a reaction time of 160 min, more than 95% COD and BOD5 removal was observed.Conclusion: Struvite precipitation and Fenton oxidation are reliable and efficient alternatives for mature landfill treatment.

This Paper COI Code is JR_EHEM-3-1_006. Also You can use the following address to link to this article. This link is permanent and is used as an article registration confirmation in the Civilica reference:

If you want to refer to this Paper in your research work, you can simply use the following phrase in the resources section:
Jaafarzadeh haghighi Fard, Nemat Alah and Jorfi, Sahand and Ahmadi, Mehdi and Mirali, Samaneh,1394,Treatment of mature landfill leachate by chemical precipitation and Fenton advanced oxidation process,https://civilica.com/doc/488028

The specifications of the publisher center of this Paper are as follows:
Ranking of Ahvaz Jundishapur University of Medical Sciences
Type of center: علوم پزشکی
Paper count: 3,355
In the scientometrics section of CIVILICA, you can see the scientific ranking of the Iranian academic and research centers based on the statistics of indexed articles.