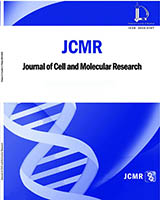 Insulin-like growth factor (IGF-1) is an anti-apoptosis factor in multiple cell types associated with various cancers. Computational methods allow investigating the systems between 50–100 atoms in the frame ofquantum mechanics and up to 50,000 atoms with molecular dynamics. Since there are specific interactionsbetween the residues, the solvent could play an important role in the stability of the native structure. Thereforeit is useful to carry out such simulations at atomistic detail. MC, MD and LD simulations of the IGF-1 were performed with the HyperChem7.0 program. The geometries, and the interaction energies, bonds, angles,stretch-bends, electrostatic and the VDW Interactions were carried out in solution and gas phase. We havecomputed the transition temperature for the IGF-1 molecule. Studying the changes occurred in the potentialenergy of the three force fields showed that Amber force field is better than MM+ and OPLS force field and also MD simulation, at least in this model, is more effective than MC and LD methods. After equilibration, theMD simulation was very stable, and the difference between the relation coefficients R2=0.8173 in gas andR2=0.7558 in water was compared. The Pearson correlation suggests that there is an inverse relationship (R=-0.25) between in vitro temperature and stability of the structure.

This Paper COI Code is JR_JCMR-2-2_007. Also You can use the following address to link to this article. This link is permanent and is used as an article registration confirmation in the Civilica reference:

If you want to refer to this Paper in your research work, you can simply use the following phrase in the resources section:
Sabbaghzadeh، reihaneh و Monajjemi، Majid و Mollaamin، Fatemeh و Oryan، Shahrbano،1389،The Effect of Monte Carlo, Molecular Dynamic and Langevin Dynamic Simulation and Computational Calculations on Insulin-like Growth Factor-1(IGF-1)،https://civilica.com/doc/542904