Epidemiological survey of Crimean-Congo Hemorrhagic Fever (CCHF), an arboviral zoonotic disease in Tehran province, from 2014 to 2018 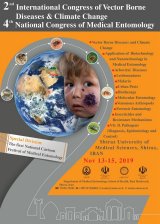 Background: Crimean-Congo haemorrhagic fever (CCHF) is a widespread disease caused by a tick-borne virus (Nairovirus) of the Bunyaviridae family. The CCHF virus causes severe viral haemorrhagic fever outbreaks, with a case fatality rate of 10–40%. The disease is endemic in Africa, Balkans, the Middle East and Asia. According to a report by the WHO published in 2017, Turkey, Uzbekistan, Kazakhstan, Russia, and Iran have 50 or more cases of CCHF per year. Crimean-Congo hemorrhagic fever virus is detected in 27 of 31 provinces of Iran. CCHF had been reported from Tehran province.Objectives: The purpose of this study was epidemiological trend of Crimean-Congo Hemorrhagic Fever (CCHF) in patients referred to health centers of Iran University of Medical Sciences (Shahriyar, Robat Karim, Baharestan, Shahr-Ghods, Malard Counties, Northwest and West Tehran) from 2014 to 2018.Materials and Methods: This is a retrospective study which concentrates on the 48 patients who referred to the Health Center from 2014 to 2018. Epidemiological status of the disease by considering descriptive indices such as gender, age group, location, occupation, month and seasonal distribution, clinical symptoms and fatality ratio were collected from the patient history documents. The patient’s information recorded were analyzed by SPSS version 15.Results: A total number of 48 positive cases of CCHF were reported in province, during 2014-2018, of which 35 (72.91%) were male, while females were 13 (27.09%). Among these patients, 48 were diagnosed as probably CCHF-positive with hematological findings positive for thrombocytopenia, of which 40 were confirmed as definite cases with seropositive testing for the CCHF virus. The most confirmed cases occurred in 2017, whereas the most death cases occurred in 2015, when five out of eight patients died with a probable or confirmed diagnosed. Also, the incidence of illness in the spring season (June) was higher than in other seasons. Out of 40 positive cases of CCHF, 39 patients (97.5%) resided in urban areas, and the rest, 1 (2.50%) lived in rural areas. In 95% of the patients, symptoms of fever, bleeding and thrombocytopenia were detected. The highest prevalence of CCHF was observed in the ≥50 and the lowest found in 0-9 years age groups.Conclusion: Entomological and CCHF cases surveillance, Training of people at risk, doing safety measures, such as keeping fresh meat in the refrigerator for 24 hours are necessary suggested. Personal tick avoidance measures are also recommended, such as the use of insect repellents, adequate clothing and body inspection for adherent ticks. When feverish patients with evidence of bleeding require resuscitation or intensive care, body substance isolation precautions should be taken. Finally, special stocks of ribavirin must be stored to protect high risk personnel against CCHF.

This Paper COI Code is DCME02_103. Also You can use the following address to link to this article. This link is permanent and is used as an article registration confirmation in the Civilica reference:

If you want to refer to this Paper in your research work, you can simply use the following phrase in the resources section:
Cheshmberah, Azar and Golmohammadi, Ali and Mahmoudi, Javad and Moosa-Kazemi, Seyed Hassan and Beik-Mohammadi, Mojtaba,1398,Epidemiological survey of Crimean-Congo Hemorrhagic Fever (CCHF), an arboviral zoonotic disease in Tehran province, from 2014 to 2018,2nd International Congress of Climate Change & vector borne Diseases and 4th National Congress of Medical ,Shiraz,https://civilica.com/doc/965751

The specifications of the publisher center of this Paper are as follows:
Ranking of Iran University of Medical Sciences
Type of center: علوم پزشکی
Paper count: 4,517
In the scientometrics section of CIVILICA, you can see the scientific ranking of the Iranian academic and research centers based on the statistics of indexed articles.