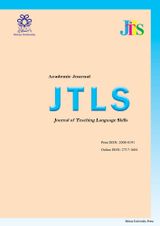 While the bulk of literature repletes with studies on emotional intelligence and its effect on teachers' performance and students' academic achievement, few have been released as to the potency of the factors that can foster emotional intelligence inside classrooms. Accordingly, the present study aimed to investigate the extent to which spiritual intelligence could be a predictor of emotional intelligence. The data were collected through a merger of the Brief Emotional Intelligence Scale (BEIS-۱۰) and Spiritual Intelligence Self-Report Inventory (SISRI).  The evolved ۳۴-item questionnaire was translated into Persian to ensure maximum comprehension of participants. The sample of this study consisted of ۸۴۷ undergraduate Iranian EFL learners from two provinces in Iran. Three phases were in this study. First, an exploratory factor analysis of SISRI-۲۴ was performed. Second, confirmatory factor analysis of both inventories, individually, was done by IBM SPSS AMOS. This was followed by CFA of the ۳۴-item questionnaire. Last, multiple regression analysis was modeled to find the predictive relationships. The results of PCA revealed a three-factor model of SISRI (۱۸ statements). CFA also verified both inventories under investigation. The model fit estimated of the ۳۴-item questionnaire was sufficiently adequate to approve the model. Multiple regression analysis also indicated that critical existential thinking could predict both appraisal and regulation of own emotions as well as utilization of emotions. Likewise, conscious state expansion could predict the utilization of emotions. It was also found that personal meaning production could predict the appraisal of other emotions.

This Paper COI Code is JR_JTLS-41-1_001. Also You can use the following address to link to this article. This link is permanent and is used as an article registration confirmation in the Civilica reference:

If you want to refer to this Paper in your research work, you can simply use the following phrase in the resources section:
Ghadiri, Momene and Zarei, Gholamreza and Esmaeili, Amir,1401,Validation of Spiritual and Emotional Intelligence questionnaire and Predictability Power of the Former for EFL Learners’ Performance,https://civilica.com/doc/1393758

The specifications of the publisher center of this Paper are as follows:
Ranking of University of Isfahan
Type of center: دانشگاه دولتی
Paper count: 20,208
In the scientometrics section of CIVILICA, you can see the scientific ranking of the Iranian academic and research centers based on the statistics of indexed articles.