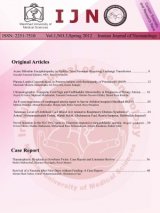 Background: Infantile colic is defined as episodes of extreme and excessive crying due to unknown causes. Various results have been reported regarding the management of colic with probiotics in terms of effectiveness, with no side effects or health risks in the infants. The present study aimed to evaluate the effect of probiotics on the infants with colic using the quadratic inference functions (QIF).Methods: This single-blind, randomized, clinical trial was conducted on 98 infants admitted to the pediatric gastroenterology clinic of Bu Ali Sina Hospital in Sari, Iran. The neonates were diagnosed with infantile colic by a pediatric gastroenterologist. Patients were randomly divided into two groups (49 subjects per each). In the control group, the infants received placebo, and in the case group, the neonates were administrated with BioGaia probiotic oral drops for 21 days. The QIF method was fitted to analyze the influential factors in the improvement of infantile colic.Results: According to the QIF results in data analysis, mean duration of crying had a significant difference between the infants in the case and control groups (P<0.001). Moreover, time (first, second, and third week) was determined as a leading variable in the improvement of infantile colic (P=0.001).Conclusion: According to the results of longitudinal data analysis, use of probiotics in the evolving gut could reduce infantile colic and improve the quality of life in the studied neonates

This Paper COI Code is JR_IRJN-8-3_012. Also You can use the following address to link to this article. This link is permanent and is used as an article registration confirmation in the Civilica reference:

If you want to refer to this Paper in your research work, you can simply use the following phrase in the resources section:
Tatari, Maryam and Yazdani-charati, jamshid and Karami, Hassan and Rouhanizadeh, Hamed,1396,Effect of Probiotics on Infantile Colic Using the Quadratic Inference Functions,https://civilica.com/doc/887182

The specifications of the publisher center of this Paper are as follows:
Ranking of Mazandaran University of Medical Sciences
Type of center: علوم پزشکی
Paper count: 2,034
In the scientometrics section of CIVILICA, you can see the scientific ranking of the Iranian academic and research centers based on the statistics of indexed articles.