The Relation between Energy Consumption in Small Urban Workshops and their Environmental Pollution Emissions: a case study from Qom city 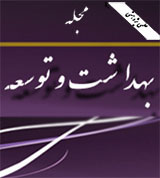 Background: One of the major environmental impacts of energy use is air pollutant emissions such as greenhouse gases. The aim of this study was to investigate the relation between energy consumption in small urban businesses and their air pollution in small urban businesses in the city of Qom in ۲۰۱۵.   Methods: In the first step, by referring to Qom chamber of trade, a list of all urban jobs from ۶۷ trade :::union:::s was prepared and then, a total of ۲۲۳ workshops were selected randomly and visited. Means consumption of electricity and gas were calculated by referring to the related gas and electricity offices in Qom. The amount of pollutants produced from energy consumption was calculated by using the software available at the Abraxas Energy website.   Results: The results showed that the average monthly consumption of ۹۰۹۸.۸۶ kwh and ۴۱۶۶۹.۳۵ cubic meters of gas in the small businesses of Qom, on average produced ۵۰.۹۹۵ of carbon dioxide, ۷۸.۹۶۳ kg of lead compounds, ۵۲.۳۹ kg nitrogen compounds, ۸.۴۰۳ kg carbon monoxide, ۵.۰۲ kg volatile organic compounds, ۱.۹۹۶ kg nitrogen oxides, ۱.۷۸۱ kg mercury compounds and less than ۱ kg per month particulate matter and SO۲.   Conclusion: Any attempt for reducing energy consumption, in addition to its economic benefits, can be a basic measure to reduce environmental pollutants. Implementation of proper management plans for reducing electricity and gas consumption is a major step in this direction.

This Paper COI Code is JR_JHD-7-4_004. Also You can use the following address to link to this article. This link is permanent and is used as an article registration confirmation in the Civilica reference:

If you want to refer to this Paper in your research work, you can simply use the following phrase in the resources section:
Fahiminia, Mohammad and Jafari Mansoorian, Hossein and Rajabizadeh, Ahmad and Karimyan, Kamaladdin and Skandari, Akbar and Anbaz, Azita and Bahari, Somaye,1398,The Relation between Energy Consumption in Small Urban Workshops and their Environmental Pollution Emissions: a case study from Qom city,https://civilica.com/doc/1221352