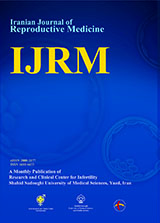 Background: The purpose of triggering in ovulation induction is to induce the final maturation of oocytes and their release from the ovary for fertilization. Objective: The aim of the present study was to compare the effectiveness of gonadotropin-releasing hormone (GnRH) agonist and human chorionic gonadotropin (HCG) on the final maturation of oocytes and pregnancy rates in intrauterine insemination (IUI) cycles. Materials and Methods: In this randomized clinical trial, 110 infertile women who were selected for IUI entered the study. Ovulation induction was performed. Group I received 0.1 mg GnRH agonist as triggering and group II received 10,000 IU of HCG. The serum Estradiol (E2), Luteinizing Hormone (LH), and Follicle-Stimulating Hormone (FSH) levels were measured at 12 and 36 hr after injection. Results: LH surge was detected in all patients. LH levels at 12 and 36 hr after triggering was higher in Group I and it washed out earlier than group II (p=0.00). The pregnancy rate was higher in Group I, but the difference was not statistically significant (26.9% vs. 20.8%, respectively p=0.46). Also, the incidence of ovarian hyperstimulation syndrome was not different between the two groups (p=0.11). There was a significant difference regarding the estradiol levels at 36 hours after triggering (p=0.00). Conclusion: Effects of GnRH on endogenous LH surge is sufficient for oocyte releasing and final follicular maturation. Pregnancy rates and ovarian hyperstimulation syndrome incidence were not different between the groups. We suggest that GnRH agonists might be used as an alternative option instead of HCG in IUI cycles.

This Paper COI Code is JR_IJRM-15-6_005. Also You can use the following address to link to this article. This link is permanent and is used as an article registration confirmation in the Civilica reference:

If you want to refer to this Paper in your research work, you can simply use the following phrase in the resources section:
Taheripanah, Robabeh and Zamaniyan, Marzieh and Moridi, Atefeh and Taheripanah, Anahita,1396,Comparing the effect of gonadotropin-releasing hormone agonist and human chorionic gonadotropin on final oocytes for ovulation triggering among infertile women undergoing intrauterine insemination: An RCT,https://civilica.com/doc/667178

The specifications of the publisher center of this Paper are as follows:
Ranking of Shahid Beheshti University
Type of center: دانشگاه دولتی
Paper count: 25,418
In the scientometrics section of CIVILICA, you can see the scientific ranking of the Iranian academic and research centers based on the statistics of indexed articles.