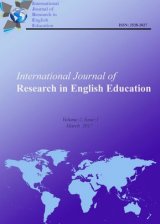 The activity of speaking is conducted spontaneously and there is not much time devoted to preplanning and arrangingthe utterances the speaker intends to deliver. Briefly defined, gambits and routines refer to the words and phrases thatfacilitate the flow of conversations. As such, one way to help learners acquire oral proficiency is to teach gambits thatsupport the social skills emphasized. The present study aimed to investigate the speaking fluency of Iranianintermediate EFL learners through conversational gambits and routines. To this end, the subjects of the present studyconsisted of an experimental group and a control group each containing 30 students who attended listening andspeaking classes. To count the frequency of gambit tokens and identify their functions, the recorded data were analyzedutilizing Keller and Warner’s classification of conversational gambits. The results of the t-test revealed that theexperimental group possessed better speaking fluency based on the occurrences of gambit categories. There was apositive correlation between the number of gambits and the scores of fluency test. Evidently, the findings of the presentstudy may have implications for EFL teachers and syllabus designers.

This Paper COI Code is JR_IJREE-3-1_005. Also You can use the following address to link to this article. This link is permanent and is used as an article registration confirmation in the Civilica reference:

If you want to refer to this Paper in your research work, you can simply use the following phrase in the resources section:
Akbari, Javad,1396,Enriching Speaking Fluency through Conversational Gambits and Routines among Iranian Intermediate EFL Learners,https://civilica.com/doc/803637

The specifications of the publisher center of this Paper are as follows:
Ranking of Islamic Azad University of Isfahan
Type of center: Azad University
Paper count: 11,503
In the scientometrics section of CIVILICA, you can see the scientific ranking of the Iranian academic and research centers based on the statistics of indexed articles.